skip to main | skip to sidebar

"Illusions commend themselves to us because they save us pain....

....and allow us to enjoy pleasure instead. We must therefore accept it without complaint when they sometimes collide with a bit of reality against which they are dashed to pieces.”
Sigmund Freud
_________________________________________________________
The photo included with this entry was a totally accidental discovery made while running errands with the young one, getting ready for the Fall Festival Parade to take place on Sunday in our town. The band every year dresses in costume, and the young one, as a senior, had his very specific costume in mind and I was transporting him to the nearest costume store to see if we could reserve it for him. 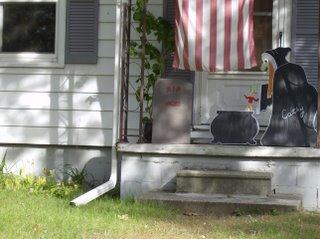 The engaging Halloween tableau shown on the small front porch of the home is the current commentary of my ex-sig other, who I have known for at least 30 years and was involved with for nearly 10. Last year, after many years of tolerance and making excuses for treatment I did not deserve, I finally separated from him. The months following that separation were difficult for both of us, and although I was very lonely for a time, I have recovered my dignity and moved on. I would imagine that as is his practice, this was meant to be hurtful, but my perspective has been so significantly adjusted recently that all I can do is smile and shake my head in sympathy.
From the lovely Halloween display, it appears that he is comfortable with documenting his relationship struggles for everyone to peruse. Perhaps the public exposure of names serves to give him some control over his pain and anger.....failure insinuated on the part of the women directs attention away from the possibility that there was some deficiency in his handling of things. Thus, the quote of the day....I hope that his illusion of control achieves the comfort that he is looking for.
Enjoy....more later...photos of the young one's choice of costume for the parade (hysterically funny to be sure)....much love to you...
v
Posted by tekkbabe859 at 7:07 PM

tekkbabe859
Single female, in creative industry providing quality assurance/proofreading skills, two sons, a cat...described by friends as "emotional" rather than "logical", funny, always smiling, helpful and can be counted upon to "step up", loyal to a fault, easygoing and approachable.

This is a Flickr badge showing public photos from tekkbabe. Make your own badge here.